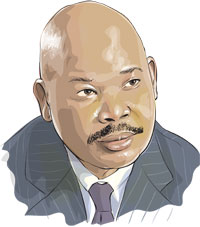 On December 30, 2012, the Sunday Nation carried an article by Prof Makau Mutua titled Kenyans must think hard before casting ballots in March.

From the title it is reasonable to expect an article advising Kenyans on what policies and considerations they should gauge the various candidates with.
Instead, Mutua used the article solely to paint an apocalyptic picture for Kenya should we elect Uhuru Kenyatta and William Ruto.
He paints a doomsday scenario that would be right at home in Mayan prophesies. In his vision for Kenya’s future, an economy that is 95 per cent locally financed collapses as the West withdraws its 5 per cent aid.
He predicts that foreign embassies would close down and tourists would shun Kenya because the country has freely and democratically elected to high office two individuals who are currently facing trial at the International Criminal Court (ICC).
Let us look at the facts dispassionately. The West is largely in recession with only a few of its nations sustaining even minimal growth.
In spite of this Prof Mutua argues that the West would levy financial sanctions on Kenya that would prevent their companies from trading with Kenyan entities or receiving profits or dividends from local subsidiaries. That is patently absurd.
The most profitable branch of a large international banking group is the Kenyan unit. Prof Mutua would have us believe that the United Kingdom would levy sanctions that would prevent it from repatriating much-needed profits.
In such a scenario these profits would be retained in Kenya for investment locally as loans at lower interest rates rather than going back to Britain to steady an economy teetering on the edge of recession.
Dire situation
The winner in this scenario is Kenya. Further yet, significant investments in telecommunications, horticulture, insurance and industrial machinery by UK companies would be rendered worthless. Given the dire economic situation in Europe, how likely is that?
Prof Mutua warns that Kenyan exports such as tea and coffee would be banned were Kenyatta and Ruto to be democratically elected.
Forgetting for one moment that this would be the most unusual sanctions regime ever imposed considering that even Zimbabwe and Sudan (which he cites as examples of where Kenya would be) are still allowed to export their staple products, what would be the net effect of banning Kenyan tea and coffee?
Well, since the international supply cannot compensate for the shortfall, tea and coffee prices in the West would sky-rocket. Leading outlets in those countries would have to slash jobs and close down resulting in a worsening of an already bleak economic position.
Cooperating with ICC
Would their governments embark on economic suicide simply to prove a point related to a conflict that many of their citizens have never even heard of?
How would they justify destroying some of their own economic sectors because suspects, not even convicted, have been democratically elected to state positions, and are still cooperating with the ICC?
Prof Mutua also forgets to mention that the US would never participate in the sanctions he is forecasting. Sanctions are levied by Congress, and with a Republican controlled House and a close minority in the Senate, there is no chance that the avowed opponents of the ICC would support such measures.
It is worth noting that President Obama has never attempted to sign the Rome Statute which his predecessor George W. Bush unsigned in his first official act as president.
The ICC is maligned in America and the Democrat administration will not waste the precious little foreign affairs capital it has left after the Benghazi debacles on propping up the deeply unpopular global court in the face of what is likely to be fierce opposition from the Republicans.
The international community will not implement the measures that scare-mongers like Mutua like to peddle. No country has come out and stated that it will do so.
The unofficial comments by some members of the diplomatic corps are meant to influence the elections in favour of a certain candidate perceived by them as “West-friendly”. They know they need Kenya economically, strategically and militarily.
There are numerous examples of war crimes suspects being allowed to vie for and hold senior government positions even as their trials proceed.
Former Kosovo prime minister Ramush Haradinaj was allowed to continue serving in government by the International Criminal Tribunal for the Former Yugoslavia (ICTY) because, like Mr Kenyatta and Mr Ruto, he was cooperating fully with the court.
This is the internationally accepted practice which a lawyer of Prof Mutua’s standing no doubt knows.
That he omits to mention this speaks volumes for his motivation and bias.
His political leanings are well known. He should tell Kenyans the truth; the sky will not collapse on our heads if and when we elect Uhuru Kenyatta and William Ruto.
Jasper Mbiuki is an advocate and CEO of The First Commodity House. [email protected]
nation.co.ke
12 Proven Ways To Become Rich In Kenya < Previous
Messi Angers Fans After Thanking Everyone But Ronaldo During Acceptance Speech Next >
Recommended stories you may like: