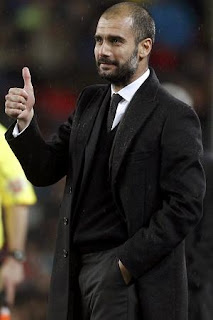 PEP GUARDIOLA will decide to become Manchester City manager in the summer.

Guardiola has opted for City as he is convinced they can become a force to rival his former club Barcelona.
The hottest property in world football will snub interest from Manchester United, Chelsea, Bayern Munich and AC Milan to replace Roberto Mancini at Eastlands at the end of the season.
Only last week Guardiola confirmed he is ready to return to coaching this summer after a year-long sabbatical, although he was coy about where.
He said: “I will return next season but it would show a lack of respect to talk about any team that has a coach.”
However, last night a top source in Spanish football revealed: “It is 100 per cent certain that Guardiola is going to City this summer.
“And when I say 100 per cent I don’t mean 99 per cent, I mean 100 per cent!”
Mancini appears doomed after two failed Champions League campaigns.
Guardiola will be the highest-paid boss in Britain on £10m a year AFTER tax.
The Sun

Man City Is Charging Sh 8000 For A Match Ticket… And The Fans Are Furious < Previous
How Facebook Silenced Google, Then Got Silenced (Hilarious) Next >
Recommended stories you may like: