A breakaway group of elite clubs are attempting to curb the spending power of Manchester City and Chelsea.
A letter, signed by Manchester United, Liverpool, Tottenham Hotspur and Arsenal and published on Arsenal-headed notepaper, was circulated at a Premier League meeting before Christmas.
Addressed to Richard Scudamore, the Premier League chief executive, it called for UEFA’s financial fair play controls to be implemented strictly — a step on from the regulations currently under consideration.

In a clear attack on high-spending owners such as Roman Abramovich at Chelsea and Manchester City’s Sheik Mansour, the letter reads: ‘Thank you for your continued work on the vital subject of Financial Regulation for the Premier League.
‘However, we do not feel that the latest proposals go far enough to curb the inflationary spending which is putting so much pressure on clubs across the entire League.
‘We continue to believe that to be successful and have the best chance of gaining at least the 14 votes necessary, any proposals for Financial Regulation must include meaningful measures to restrict the owner funding of operating losses. 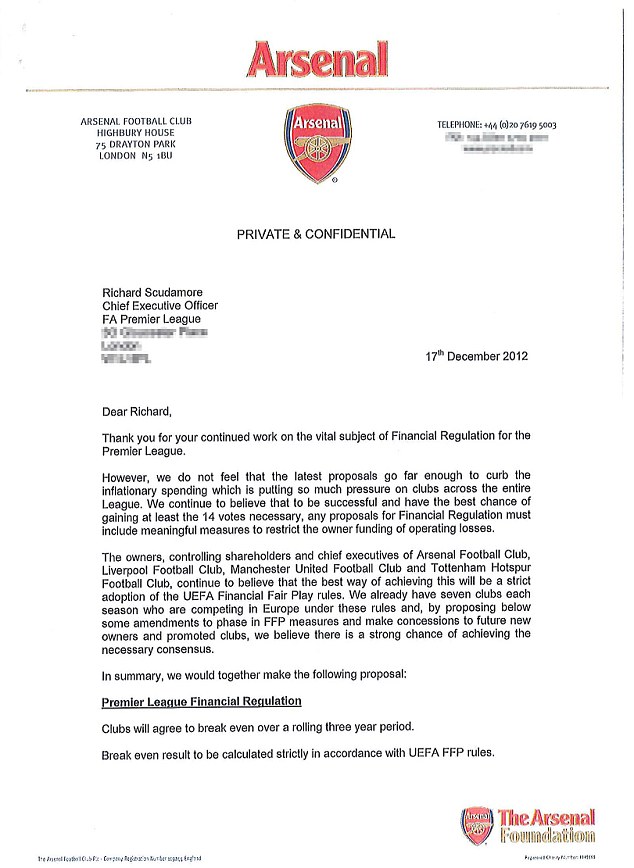 ‘The owners, controlling shareholders and chief executives of Arsenal Football Club, Liverpool Football Club, Manchester United Football Club, and Tottenham Hotspur Football Club, continue to believe that the best way of achieving this will be a strict adoption of the UEFA Financial Fair Play rules.
‘We already have seven clubs each season who are competing in Europe under these rules and, by proposing below some amendments to phase in FFP measures and make concessions to future new owners and promoted clubs, we believe there is a strong chance of achieving the necessary consensus.
‘In summary, we would together make the following proposal:

The letter was followed up by a 10-minute speech from Manchester United chief executive David Gill, who advocated handing over control of the new regulations directly to UEFA — a move that would as good as make UEFA president Michel Platini the head of English club football.

MailSports
This Woman Refused To Abort Her Deformed Baby Despite Doctors’ Advice… Inspirational < Previous
Mourinho Believes Real Vs Manchester United Should Be The Final Next >
Recommended stories you may like: