By Ken   /   Monday, 14 Jan 2013 08:52PM   /   Leave a Comment
Research company Infotrak has responded to claims that most of its staff are from the Luo community. Immediately after releasing its most recent opinion poll last week, reports by various blogs indicated that the company has the composition of its top management and the enumerators made up of an unusually high percentage of Luos. Similar remarks were also made during Jubilee’s rally at Uhuru Park. This was the list that has been circulating.

47 out of 51 enumerators are from one community.

However, Infotrak has come out to deny the allegations, with a well prepared list showing the tribal composition percentage of its staff. From the list provided, Luo’s only make up 20% of its work force.
It’s decision to release the list was however not received well by everyone. Some who commented expressed disappointment that the company had to respond to cheap gossip. Journalist Larry Madowo wrote,

Here is the summary as provided by Infotrak. 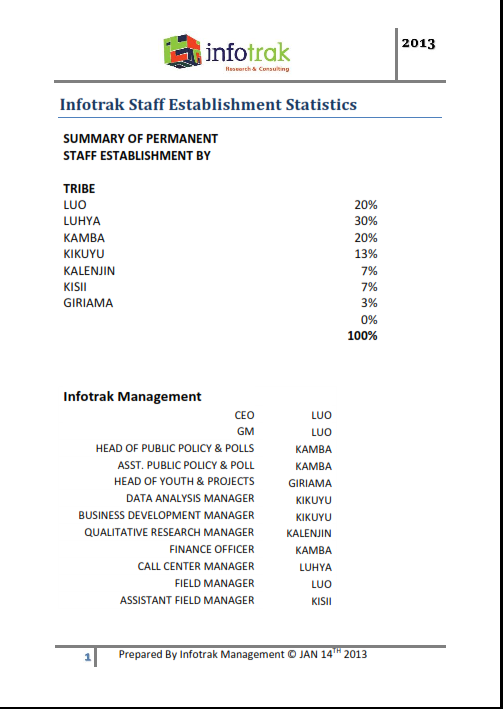 True Story: How Carol Radull Almost Got Conned < Previous
Karua Hints That CORD Is Sponsoring Infotrak As Jubilee Sponsors Synovate Next >
Recommended stories you may like: