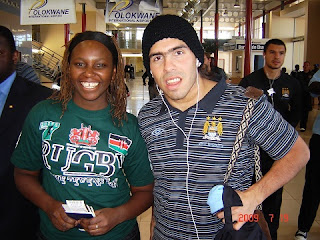 Radio Africa’s Carol Radull is a lucky woman after narrowly escaping the ‘conman’s noose‘.
Yesterday, Radull famous for her show The Score, which airs on both Kiss 100 and Classic 105, took to Facebook to inform her fans on how she almost got conned Sh 1000 by a person on Facebook. Apparently some creative mind wanted to claim a prize that was not his, after Sunday’s prediction game. Here was her post.

GOSH! I have nearly been conned! Someone has just created a FB account in the name of Samson Chepkwony and sent me a number via inbox to Mpesa 1,000/- for jana’s prediction game. I realised because 1. The instructions are not to send me your number via inbox; and 2. I had seen Samson’s photo when I sent the inbox message to him after yesterday’s game. This guy did not have a photo and when I opened his page; it was created 21 minutes ago!!!! Gee Kenyans are creative; no wonder people get conned daily!

Carol‘s case is becoming common in Kenya, especially in the celebrity circles, where most of them have social media impersonators. This time however, the victim was not a celebrity, but just a commoner who had gotten his prediction right.
© nairobiwire.com

How To Know You’ve Been Cursed.. Reloaded < Previous
Infotrak Releases Tribal Percentage of Its Staff… And Surprisingly No One Tribe Dominates As Alleged Next >
Recommended stories you may like: