Billionaire PayPal Founder To Build A City In Mars 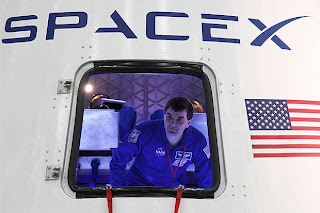 THE billionaire co-founder of PayPal plans to build a futuristic settlement on Mars for tens of thousands of space explorers.

Visionary Elon Musk, whose Falcon 9 rocket delivers Nasa cargo to the International Space Station, wants to construct a small city for 80,000 pioneers on the Red Planet.
The new civilisation would run off sustainable technology and cater only for vegetarians.

Speaking to the Royal Aeronautical Society, Mr Musk, 41, revealed he had been waiting ten years to share his vision.
He said: “Then it seemed ridiculous because there were no rockets, no infrastructure and Nasa was the only game in town — and it had no schedule for exploring Mars.
“But with my work, and many others working in the private sector, the mission is coming closer to reality.
“On Mars you can start a self-sustaining civilisation and grow it into something really big.”
The 146-year-old Royal Aeronautical Society last November awarded Mr Musk, who founded his third company SpaceX in 2002, a gold medal for his contribution to space exploration.
The California-based engineer has previously talked about sending the Mass Cargo Transport rocket  powered by liquid oxygen and methane, to Mars – carrying volunteers for about £300,000 a person.
One of America’s most respected private space entrepreneurs, Mr Musk – worth about £1.25bn – has admitted the challenges remain daunting.
These include the dangers of deep-space radiation, bone-rot and toxic dust.
He recommends the size of the new society should be around 80,000 people. “Too few, and the gene and culture pool dries up,” he said. “Too many and you risk civil war.”