The King Is Back.. Thierry Henry Returns For Arsenal Again 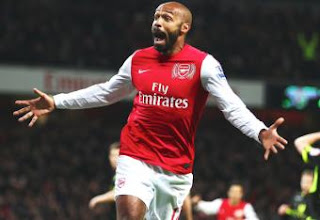 It seems that English giants Arsenal and living Arsenal legend Thierry Henry cannot get enough of each other, as the Frenchman agreed to a second consecutive loan spell at the club. Following a dismal start to the season (five wins in 15 games), Arsenal will be hoping that the return of the club’s all-time leading goal scorer will spark a mid season revival.
According to Goal.com, New York Red Bulls have given the go-ahead for Henry to head to England for a short-term loan. Last season, the 35-year-old enjoyed a six-week loan spell at Arsenal prior to returning for the start of the MLS.
Following the end of the MLS season—which saw the L.A. Galaxy prevail as champions—Henry is not required for competitive domestic duties until March. Considering the extended layoff, the Gunners are looking at extending the prolific goal scorer’s second loan spell to more than the six weeks previously had.
For Arsenal, the arrival of Henry at the club could prove instrumental in improving their shocking start to the season. Last time around, Henry’s return to the club brought with it three goals from seven substitute appearances. Most notably, perhaps, was his dramatic last-gasp goal against Leeds United, where Henry scored with his first touch of the ball, deep into the match.

Despite netting an astonishing 228 times for the Gunners, Henry has proved prolific at New York Red Bulls also. Last season, the former French International bagged 15 goals for the Bulls and 12 assists. In just 25 appearances, it is proof that he still has what it takes, despite being 35 years old.
Arsenal manager Arsene Wenger has made no secret of his desire to see Henry begin his third spell at the club saying:

Henry is the talent that you dream to have. He has fantastic physique, fantastic technique, a fantastic brain, all built together in one man. At the start he was not confident enough but he has gone on to show what a great player he is.

Arsenal currently lie in 10th position in the English Premier League, already a staggering 15 points off the pace set by Manchester United.
If all goes according to plan, Henry will be available for selection as soon as the January transfer window opens.
Bleacher Report
Chris Brown NOT Coming To Kenya This December < Previous
Jicho Pevu’s Mohammed Ali Dumps ZUKU…. Heads to Startimes.. Maybe Next >
Recommended stories you may like: