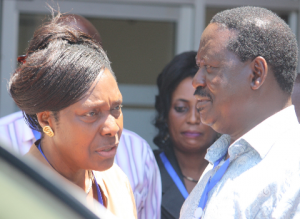 It is emerging that Prime minister Raila Odinga may crack the whip on his immediate former loyal lieutenant Charity Ngilu, by taking away the ministerial position from her. Persons close to the prime minister and his presumed running mate Kalonzo Musyoka are reportedly pushing for the sacking of Ngilu, due to her decision to join the Jubilee alliance.

Ngilu took Raila for a ride, when she appeared during the unveiling of CORD at KICC, only to bolt out of the coalition a few days later, claiming that at Jubilee unlike CORD, she would be given a chance to fight for the presidential nomination. That however has not happened and Jubilee delegates will on Tuesday decide between Uhuru and Mudavadi. Her position in the alliance is still not clear.

According to sources, assistant minister David Musila might be replacing Ngilu in the cabinet, should Raila decide to sack her.
Though appointments and sacking of ministers is a matter of consultation between Kibaki and Raila, each of them generally dictates what happens with ministers from his side of the coalition, and that’s where matters may get out of hand.

If Raila decides to act, Jubilee may also pressure Kibaki to relieve Kalonzo Musyoka and Mutula Kilonzo off their duties, further polarizing the country.
It remains to be seen how things will play out in the coming days.
© nairobiwire.com

Ferguson Confirms That He Will NOT Buy Wanyama In January < Previous
Nyambane Joins Politics Next >
Recommended stories you may like: