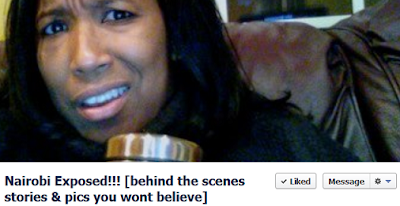 ‘Campus Divas For Rich Men’ aside,  ‘Nairobi Exposed!!! [behind the scenes stories & pics you wont believe]’ was probably the fastest growing Facebook page Kenya had seen. Within a few days of being created, it boasted of having thousands of likes, with hundreds liking it daily.
The main reason the page went viral was because of its very controversial reports with little or no evidence. Most of these revolved around musicians, politicians and media personalities. With thousands of likes, the page admin was able to order anyone to ‘check their inbox’.
Basically, an informant informed the admin of some hot gossip, after which the latter contacted the celebrity at the middle of it. The conversation between the page admin and the celebrity was then posted on the page.
Most of the allegations brought forth were unsubstantiated, and the culprit ended up denying everything. Some of those who have been touched include: Jimmy Gait, when he was accused of being behind the troubles of a fellow gospel artiste, Mzazi Willy M Tuva, when he was accused of asking for sexual favours to help an upcoming artiste advance her career, Kiring’o Ng’arua, when she was accused of dating a married CEO, Singer Amani, when she was accused of been spotted in Uganda with a married man, Prince Quibbs (YU Advert), when he was accused of being gay, Tazama Chapaa’s Shiku Kaitanny, when she was accused of being a lesbian, Ala c sex scandal, among many others.
The admin of the page has since opened another similar page, confirming that indeed the previous page was deleted.

I WOULD LIKE TO MAKE IT CLEAR FOR THE 10TH TIME THAT OUR OTHER PAGE WAS NEVER HACKED! IT WAS DELETED BY FB AND WE HAVE AN EMAIL TO CONFIRM,SO LET NO ONE FOOL YOU AND BRAG THAT THEY HACKED! IT WASNT!

He/she is now operating on a brand new page, with not as many fans yet.
The reasons as to why this particular page was deleted are not clear, unlike ‘Campus Divas For Rich Men’ which was allegedly deleted for posting photos without the permission of owners.
© nairobiwire.com
Messi Has Not Broken The Goalscoring Record Yet, This Zambian Scored 102 Goals In 1972 < Previous
Mutula Kilonzo And Esther Murugi Nominated For The Gay and Lesbian Awards Next >
Recommended stories you may like:

Nadia Mukami: “Let No Man Lie To You To Sire A Child For Them”