How Kenyans Bashed Mudavadi For His Political Naivety 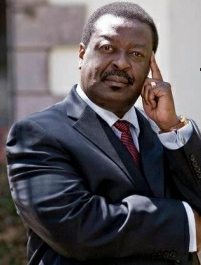 Deputy Prime Minister Musalia Mudavadi yesterday came under attack from Kenyans for what many saw as political naivety. Mudavadi or ‘Ma dvd’ as he is now being referred to, called a press conference where he revealed that Uhuru Kenyatta had agreed to drop his presidential ambition and support him. The purpose of those revelations was probably to portray Mudavadi as the victim and possibly gain Kenyans sympathy.

Below are some of the attacks Mudavadi went through the whole day, Tuesday, on Twitter.

Huyu Mudavadi anafanyiwa everything. Even his last born was sired by a Muhindi. Damn!!!

If #Mudavadi is this much of a laughing stock online, imagine the thrashing he would receive at a #JubileeConfusion delegates conference 🙂

Stop referring to Mudavadi as MM. Y’all making him look glam and posh. Call him Mudavadi!”

At least Mudavadi got Mungatana back to limelight, haven’t seen/heard him for a while..

Mudavadi is lyk a gal demanding back her virginity”

its so clear mudavadi is really good at making bad decisions.

Come to think, Mudavadi should just blame himself. These are ICC suspects you are dealing with my friend.

Mudavadi is the next president for Kenya. To subscribe to such jokes send “Mudavadi” to 8484. Thank you.

But really. Messi should sue Mudavadi for the reference.

lmao., this mudavadi story though…i can only imagine how hard uhuru is laughing right now.

if you #Mudavadi can be played before u become President, can I trust you???—-NEVER EVER!!!

Mudavadi believed they would name him the presidential candidate, then uhuru shouted “you’ve been punked!”

Mudavadi behaves like a lady who was impregnated and now claims how she was duped into sex without a condom. Ajab!!!!

If you listen to Mudavadi really carefully, you might hear the sounds of his parents kicking themselves for not using protection”

Mudavadi will leave the alliance and join the mayans in pushing for the end of the world.

This is Everything That’s Trending in Nairobi Today

Date Set for President Uhuru’s State of the Nation Address