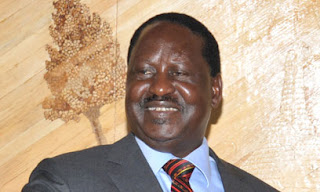 The actual dinner comprised of onion soup for starters, with the main meal having chicken, fish, ugali and potatoes. The event started at 8 pm, two hours after the 6 pm it was supposed to start. It ended just before 11 pm.

Among the invited guests were a deputy prime minister from Kosovo – a country with 6 deputy premiers, dignitaries from the people’s republic of China, Kenyan businesspeople Karim Popat (Simba Colt) and Tabitha Karanja (Keroche Breweries), politicians Anyang Nyong’o, Paul Otuoma among others.
Tabitha Karanja lauded Raila for promoting local businesses. While introducing Popat, Raila recounted how the businessman gave him funds to buy his first car back in 1977.
The prime minister took his guests through his mission and vision for the country, with infrastructure and jobs top of his agenda.

This was not the first campaign dinner that the prime minister hosted. Back in July, he hosted a Sh 100,000 dinner where he raised Sh 26 million. Ruto then followed, with his own dinner with a plate going for a similar amount. He raised 41 million. Kalonzo would soon follow, with his raising Sh 39 million.
© nairobiwire.com

How Kenyans Bashed Mudavadi For His Political Naivety < Previous
Dear Musalia Mudavadi (Watermelon in Chief) Next >
Recommended stories you may like: