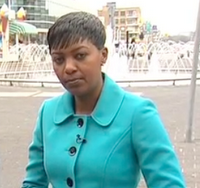 Sultry talented NTV news reporter Rita Tinina is one of the best reporters according to many viewers of the station. Apparently she has also become one of the most sought after talents and has been offered several proposals to leave the station.
Tinina seems to be very loyal to NTV which has groomed her talent to being among the top ten best news girls in the country. Recently she was offered a job by an international media house to represent the East and Southern Africa region though Tinina is reported to have rejected the offer.
The international media house is making an entry to the region and is now scouting for another talent after the rejection by Tinina. Tinina however is still not safe from poachers as the local media houses are also after her.
Rumor has it that Standard Group C.E.O. may be considering deploying her to join the new KTN.
d-post
Jicho Pevu’s Mohammed Ali Resigns From NTV – Heads Back To KTN < Previous
Why Mohammed Ali Resigned From NTV Next >
Recommended stories you may like: