Why Mohammed Ali Resigned From NTV

Why Mohammed Ali Went Back Home 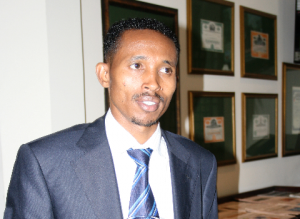 Kenyans were yesterday shocked to learn that number one investigative journalist Mohammed Ali, had resigned from NTV barely four months after joined the station. It was more surprising that he was actually headed back to where he came from (KTN). The news was very much unexpected, as it always looked as though Moha was doing well at the ‘twin towers’. During his first few days at NTV, Moha got everyone talking when he exposed the deeds of Pastor Njoroge. He has since done a few other stories for the station.
Whatever had made the journalist leave KTN has never been made public, but it is believed he was offered better remuneration and terms. Perhaps he was also excited by the prospects of working with John Allan Namu again.
Having Moha in their flock brought immediate impact on NTV’s viewership, as was characterized by the Pastor Njoroge / Mwende story. Had the station retained his services, viewer loyalty was bound to grow, and for this reason Standard Group was visibly excited of bringing him back; they couldn’t wait to confirm the previously unconfirmed reports. This was their post.

Popular Investigative journalist Mohammed Ali is back at KTN.
Ali, famous for special investigative report Jicho Pevu is among a host of TV personalities and media managers making a comeback to KTN.

Making the announcement on Tuesday, Standard Group Chief Executive Officer Mr Sam Shollei said Ali’s comeback as well as that of other media personalities is part of the agenda to boost KTN’s professional capacity and growth and offer viewers the best.
The award winning Ali left KTN three months ago for another TV station.
He is the face behind Jicho Pevu, a bold investigative programme aired on KTN.

So what really made Mohammed Ali leave NTV?
It is believed that the Kimathi Street station does not practice editorial independence, and that some individuals in government and business have top Nation managers in their pockets. Dozens of reporters have often been left frustrated after their stories are killed by top editors without any clear explanation. This are the kind of stories that touch on certain government leaders or rich businessmen.
Blogger Robert Alai names Transport minister Amos Kimunya and head of the civil service Francis Kimemia as some of the individuals who determine what you watch on NTV or read on Nation newspaper. The blogger also mentions a Mr. Atul Chandaria of I&M Bank as one of the key ‘story killers’. Allegedly, he recently met a top editor at the Stanely Hotel, where the latter was given Sh 5 million, so that I&M Bank would not be mentioned negatively in a money laundering investigative piece. That was the end of the story.
For the short period Moha has been at NTV, he has reportedly seen his investigative pieces considerably watered down, with parts implicating top government officials removed. One of his pieces was reportedly reduced from 60 minutes to just over 30 minutes. Moha has not been comfortable with this arrangement, and when the new Standard CEO approached him, he saw an exit opportunity. His independence had been taken away and he would not take it any more.
© nairobiwire.com
NTV’s Rita Tinina Rejects BIG Job < Previous
Uhuru Kenyatta: I’m Not Adolf Hitler Next >
Recommended stories you may like: