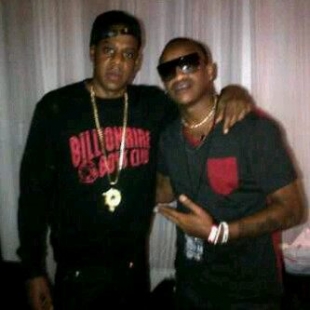 Prezzo who was announced as the Celebrity Ambassador for the One Campaign, an organisation which aims to fight extreme poverty and global diseases, attended Jay-Z’s Barclays series concert over the weekend as part of his new status.
Prezzo who had access to the VVIP area posed for a photo with the mogul and posted it on twitter. Prezzo later left New York for Washington for what he termed as a strategy meeting with the One Campaign creative team.
“Off to Washington had a blast in NY. Tomorrow back to business, meeting with @ONECampaign creative team. #SwaggerFarmer God bless ya’ll,”he tweeted.
Prezzo was the first Kenyan representative to ever make it to the finals, ending up as the first runner-up thanks to the massive votes from his loving fans, leaders, politicians, friends, family and fellow musicians from across the East African region and beyond.
In his new position, he’s expected to join other well-known international icons and ambassadors in the campaign against extreme poverty and disease, specifically in the vast African region. He’ll be teaming up with the likes of the award winning actor George Clooney and rock star Bono.
By the Star
Bend Over Singers, RDX Blame Kenya’s Swaggerific Concert For Ruining Their Reputation < Previous
NTV Might Discontinue MALI TV Show Next >
Recommended stories you may like: