“We are not controversial. This whole controversies started in Kenya… “ 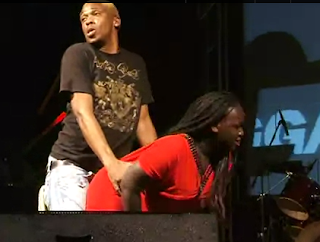 Jamaican dancehall duo, RDX, famous for their smash hit ‘Bend Over’, have blamed Kenyans for ruining their reputation. Speaking to a UK radio station, Renegade, one of the group members said that it was only after their Kenya concert that they were painted as ‘controversial’.
“We are not controversial. This whole controversies started in Kenya where they painted us as some really immoral musicians. Our music is normal and we sing about what goes on a daily basis; this is the dancehall culture,” he said.
In 2011, RDX ‘Swaggeriffic’ concert at the Kenyatta International Conference Centre, turned into a ‘porn hub’ after almost naked ladies jumped on stage and ‘bent over’ to the delight of the singers and the amusement of the crowd. The artistes received lots of criticism especially after videos of the concert were uploaded on Youtube.
This is not the first time RDX has attacked the ‘treatment’ they received in Kenya. They had previously compared Kenya’s concert unfavourably to one they held in Uganda. They even dissed Nairobi’s Jacaranda hotel, calling it a fake hotel.
© nairobiwire.com
Avril Denies Ever Dating Jalang’o < Previous
Prezzo Meets Jay Z Next >
Recommended stories you may like: