Nancy Baraza To Be Paid Sh 200 Million For Resigning 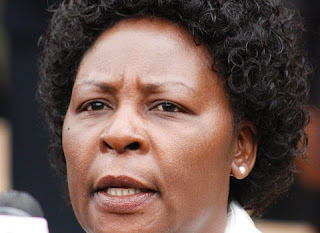 The resignation was however not smooth and quiet, as Baraza singled out Chief Justice Willy Mutunga as having made prejudicial remarks on an interview with Citizen TV.
“Although I have preferred an appeal in the Supreme Court challenging the recommendations of the tribunal set up be your Excellency to probe my conduct, I do not see myself getting a fair and impartial hearing before the court as currently constituted. Two of the judges sat at the Judicial Service Commission which petitioned your Excellency to appoint the tribunal that probed my conduct. They cannot therefore logically and legally sit on my appeal.
“Secondly the Chief Justice in a recent television interview endorsed the tribunal’s recommendations against me which are the subject of my appeal. This has compound my fears that I will not get a fair trial before a bench in which he will participate.
“I still reject the tribunal findings which I found most injudicious and not founded in known principles of law. However, our country is bigger and greater than any one of us,” she said.

For the period Baraza has been on suspension, she has been receiving half her salary. Since 25th January when the DCJ was suspended she has approximately earned Sh 4 million, at an average of Sh 500,000 a month. However, this is just a tip of the iceberg on what she is expected to take home as her ‘send off’ package.

Whether it’s proper timing or she genuinely felt that she wouldn’t get a fair trial, Baraza definitely made the right decision in calling it quits, because she is now entitled to almost Sh 200 million.
If and when a judicial officer with security of tenure leaves on her own volition, she is entitled to an amount equivalent to what is left in the remaining years of service. For Baraza, she had 15 more years till she attained the constitutional age of 70, after which she would have left service.

At an average pay of Sh 1 million every month, the former DCJ would have taken home at least Sh 180 million over 15 years. Adding several benefits here and there, the figure would have well been over Sh 200 million. Since she has left service on her own volition, Baraza will still take home the Sh 200 million. This time not in a 15 year period but a far much less amount of time. Patrick Kahonge, a legal expert interviewed by Capital Fm confirmed that Baraza is entitled to all her financial dues.

The timing of the resignation possibly brought in maximum returns. Had Baraza resigned 5 months ago, she would not have received 5 months of half salary.

© nairobiwire.com
Bride Who Wedded In Hospital This Week Dies of Cancer < Previous
Billionaire Winners Chapel Pastor Accused of Exploiting Worshipers Next >
Recommended stories you may like: