Bride Who Wedded In Hospital This Week Dies of Cancer 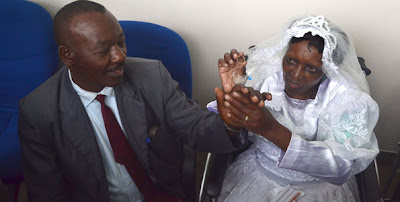 The woman whose wedding took place in a ward at Kenyatta National Hospital in Nairobi this week, has died.

Mrs Agnes Wathanu Muchoki, 54, died on Tuesday night, the day when the Nation published her story after her wedding to her husband, Mr Peter Muchoki, two days earlier.
During the interview, a tired Mrs Muchoki, who had cancer, had recalled how doctors, relatives, friends and even journalists witnessed the two love-birds tie the knot before hospital chaplain Fr John Kariba.
On her wedding, Mrs Muchoki said: “It was wonderful… It was nice… In fact I have no words to describe what happened. I have been pestering my husband for a long time to tie the knot.”
“Oh, the flowers and the cake..I have also being given a marriage certificate as well as the wedding sacrament by my Catholic church,” she added.
She had said she was looking forward to being discharged from hospital so she could be near her family on her road to recovery.
In the story, the mother of seven, had appealed to well-wishers to assist her family.
She said her first born son, who completed his medical laboratory degree course in 2009, remains unemployed.

Citizen TV Buys News Helicopter < Previous
Nancy Baraza To Be Paid Sh 200 Million For Resigning Next >
Recommended stories you may like: