Kalonzo’s Best Friend Says The Two Will Be Together 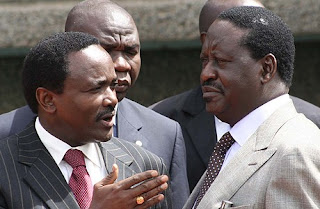 It is emerging that Vice President Kalonzo Musyoka may become Prime Minister Raila Odinga’s running mate. The two who last saw eye to eye during the 2005 referendum, where they were both in the NO camp, have issued the greatest hint yet that they may once again be on the same ticket.
Kalonzo’s greatest ally and most trusted adviser, Johnstone Muthama, who is also Kangundo member of parliament, yesterday hosted Raila in Tala and Kangundo towns. The prime minister was given a warm reception by the crowd and Muthama said that Kalonzo himself had asked Kangundo people to do so.
Muthama has never been in Uhuru-Ruto good books, ever since he made remarks that Kalonzo was to benefit from their misfortunes at the Hague. That statement almost saw Kalonzo ungratefully kicked out of the G7 alliance.
It seems that Muthama has never forgiven them, because he has reportedly been looking to Raila as a ‘compromise’ president, with his friend Kalonzo as the Vice President, again. In Thursday’s rallies, Muthama made statements insinuating a new alliance between Raila and Kalonzo. He told the crowd that Raila and Kalonzo should decide who among them goes for the presidency and who will be the running mate. “If the two work together, they will easily win. I had even warned them against splitting in last elections,” he said.
He went further to declare that the journey for Kalonzo and Raila had started at Kangundo and Tala.
Muthama did not stop there. He attacked the latest union between Uhuru and Ruto, suggesting that the two were being overly tribal. “It is wrong for two communities to say they will unite because of their numbers to win the presidency. We don’t want two people to sit in a house and decide who should be husband and wife,”he said. Notably, Muthama is one of Kalonzo’s most trusted adviser, and a personal friend. It is therefore very probable that his sentiments are Kalonzo’s.
A possible alliance between Raila and Ruto seemed possible just recently after reports of their secret meeting leaked to the media. A few days later, Ruto agreed to be Uhuru’s running mate throwing a new spin. Days later, URP MPs summoned Ruto telling him not to be Uhuru’s running mate, throwing another spin. Kalonzo has of late been missing in action, but that may change should he form an alliance with Raila.
© nairobiwire.com
My Husband Beats Me Every time Manchester United Loses < Previous
Kenyans Love Facebooking When Drunk Next >
Recommended stories you may like: