We Are Not Dating.. Never Have 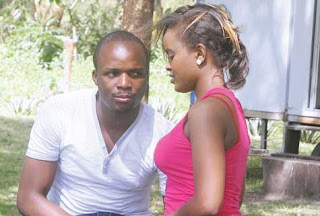 Singer Avril and Kiss 100 presenter, Jalang’o have denied recent reports that they were dating. According to Avril the relationship was purely work related and they have never shared any romantic relationship.
“Jalang’o and I do a lot of business together and so we are bound to be spotted together. He is a very nice man. He knows how to treat a lady but we are not yet there; we are on the friends zone,” said the singer.
Jalang’o had previously come out to deny the reports that first appeared on Standard’s Pulse Magazine pull out. He said he was shocked to read the story, with a supporting picture of them close to each other.
Celebrities are known to deny dating rumours until much later when it becomes all too clear. Several months ago, it was alleged that gospel artiste Juliani and Mali’s Brenda Wairimu were dating, rumours they both vehemently denied. However, Juliani admitted seeing Brenda, during a radio interview two weeks ago. It should therefore not surprise anybody should Jalang’o and Avril do the same.
© nairobiwire.com
Government To Buy Willy Mutunga an Official Residence.. Bigger Than The Vice President’s < Previous
Bend Over Singers, RDX Blame Kenya’s Swaggerific Concert For Ruining Their Reputation Next >
Recommended stories you may like: