Akon Buys Elephant On His Way To Carnivore, Nairobi

“Can’t believe how such beautiful creatures elephants are! Just purchased one in Kenya” Akon 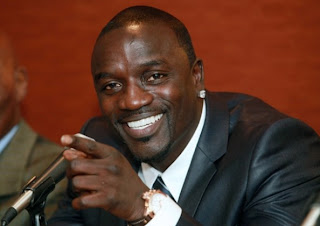 Akon performed in Nairobi twice during the weekend. First on Saturday and later on Sunday. The Senegalese – American hip hop and RnB singer arrived in Nairobi on Friday and soon headed to Ole Sereni to address journalists. He seems to have been impressed by their vigour because he would soon tweet, ” The press in Kenya moves like that of Hollywood”
He explained his desire to sign local musicians into Konvict Muzik. He was asked about Lady Gaga and whether her success has overshadowed his, considering that she was his signing. He however only had good words for her saying she was his most successful signing.
Akon soon found his way to the orphanage, where he adopted an elephant. He is not one to hide his excitement because he soon tweeted, “Can’t believe how such beautiful creatures elephants are! Just purchased one in Kenya”
The musician will be leaving the country on Wednesday and will have hopefully found one or two artistes to sign into Konvict Muzik. Already, Esther Passari’s daughter seems to be at a good position, since Akon himself allegedly requested her to perform on Sunday.
© nairobiwire.com
Safari Park Hotel Fire Given Media Blackout < Previous
Citizen TV’s Janet Mbugua Dating Controversial Politician ?? Next >
Recommended stories you may like: