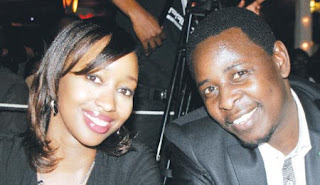 Yesterday, reports surfaced that Citizen TV news anchor, Janet Mbugua is dating business man cum politician Gor Evans Semelang’o. Standard newspaper entertainment column ‘Monday Blues’ wrote that the two were spotted at the Carnivore Simba Saloon, ‘where they were captured exchanging smiley glances.’
Allegedly, Gor told Standard reporters that he is enjoying close friendship with Janet and suggested that they were an item. “We were at Carnivore for the Mr and Miss Catholic University ceremony. We had a blast. Janet and I are tight. I wouldn’t mind taking goats and bulls to her family if I was ever asked to,” Semelang’o supposedly remarked. “She is really pretty. She has a very warm heart. I mean everyone likes her…”
The controversial businessman soon took to his Facebook account to deny the allegations. He said that the picture that accompanied the juicy story is actually of them judging Miss Catholic University beauty pageant. He wrote,”The insinuation by The Standard newspaper Monday blues that i am dating Janet mbugua is not True, The Sunday nation (buzz)of yesterday had the same picture depicting the correct position.We were judges at the Miss Catholic university with Janet among others.The comments attributed to me in that gossip page are not mine and are therefore not only erroneous but also misleading.”

Gor Semelang’o is a youthful businessman with interest in politics. He is the owner and CEO of the weekly gutter paper Truth Weekly, known for the glaring errors contained on its front page headlines. Some months back, Gor led a group of young people to a press conference, where they said that they were the ones who had visited Kibaki at State House, and not Mungiki as Ocampo claimed. Semelang’o is also a director at the Youth Enterprise Development Fund.
© nairobiwire.com
Kenya’s most Powerful business Leaders < Previous
Kenyatta University VC, Olive Mugenda’s Car Involved In An Accident Next >
Recommended stories you may like: