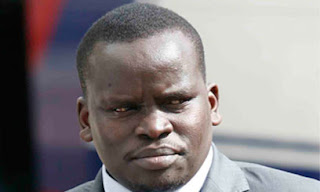 Radio journalist and ICC suspect, Joshua arap Sang is reported to have issued a quit notice to his employer, Kass FM, with intention to join politics. Arap Sang is said to be interested in Trans Nzoia senate seat, after shelving his previous plan of contesting the Cherangany parliamentary seat.
Sang was brought on board in 2005 by the then new Kass FM to produce and present a breakfast show, ‘Lenee emet’ (what the nation is saying). The show was mainly a political talk show, especially in the run up to the general elections.
Despite Sang being heavily popular in the Kalenjin nation, he remained vastly unknown to most of Kenyans, until his name was mentioned by former ICC persecutor, Luis Moreno Ocampo, as one of the 6 Kenyans bearing the greatest responsibility for the 2007 / 2008 post election violence. He was accused of inciting Kelenjins to take up arms and kill select communities. Sang was then among the unlucky 4 whose cases were confirmed.
Sang started his career as a journalist at Biblia Husema Radio, before joining Kass FM in 2005. Until his notice, he was the head of operations there. It is not clear when Sang will be leaving the station, but it has been reported that his decision to issue the quit notice was as a result of Kass FM CEO’s directive that any member of staff seeking public office next year should tender his resignation. Kass FM reportedly saw Arap Sang as a liability and that directive was probably meant to cut him loose.
© nairobiwire.com
Congestina Achieng Now Completely Insane? < Previous
Churchill Offers To Pay Congestina’s Rent For One Year Next >
Recommended stories you may like: