How Did Conge Get Here?? 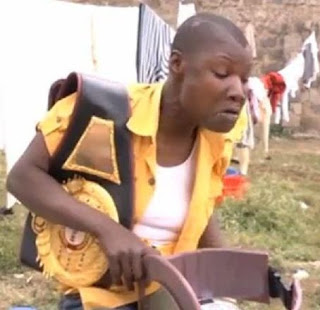 Reports doing rounds claim that boxer Congestina Achieng is not in a sane state of mind. The female boxer was a few years back feared and respected for her ruthless knock outs but towards the end of her career, she had become sort of a push over. She had severally been named as one of Kenya’s most influential women alongside the likes of Julie Gichuru and Martha Karua.
Last year, Kenyans were taken by surprise after it was reported that Congestina had been admitted at Mathare Mental Hospital. It was one of the saddest moment in Kenya’s sporting history, and that news opened doors to speculation. According to a popular Kenyan web 2.0 (user generated) website, Congestina is now said to be living in a single room shack, and has been unable to pay rent for the last 5 or so months. It is also said that she is a heavy drinker, and mostly specializes in cheap drinks characteristic of life in the slums. Conge, as she is commonly referred to, is also said to be a heavy smoker (not cigarettes).
In an interview with the nation last year, Congestina’s father narrated how his daughter had started exhibiting strange behaviour change. He said that Conge had withdrawn her 13 yr old son from school, choosing to remain at home with him, with all doors locked. She had also burnt her boxing gear and refused to see any family member. She referred to herself as an angel. When nation asked her if she would be going back to boxing, she said, “I have realized going to church, attending school and boxing are all devilish. I rather pray at home and teach my son from the house. I have realized boxing is devilish, since why should someone have her head boxed when it’s the temple of God?”
Maybe the ministry of sports should do something and salvage whatever may be left of Congestina’s career, or at least help her get on her feet even if she will never box again, after all, she once did Kenya proud.

Embedded below is an interview Congestina granted Kiss TV. Watch it and draw your own conclusions.

If video is not viewable from your browser, try our desktop version or click on this link.
© nairobiwire.com
Alice Odera: The Other New Citizen TV Business News Anchor < Previous
Joshua Arap Sang Resigns From Kass FM To Join Politics Next >
Recommended stories you may like: