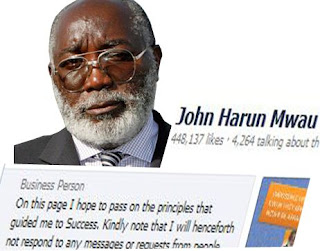 Social media accounts and specifically Facebook and Twitter have become a must have for everyone. They are especially important to politicians and public personalities. Politicians use them to communicate with youthful voters and at times take questions and suggestions. Uhuru Kenyatta has often used his official Facebook account to make statements that are then quoted by the mainstream media. All presidential candidates have made a point of having a constantly updated Facebook page.
Celebrities who have a great number of likes on their accounts, are once in a while approached by corporates so they can advertise their products. A good example is Maina Kageni, who has been singing the song ‘ Stay Young, Do Milk’ for some time now. His advertisement deal includes changing his cover photo from his own, to one with the advertiser’s message. Though it’s not clear how much such a deal costs, it is believed to be worth several hundreds of thousands up to a few millions of shillings. The bottom line however, is the number of people liking your page.
Perhaps it is the money that comes along with huge Facebook pages that has motivated more and more public figures to open social media accounts and especially Facebook. Shaffie Weru recently joined it and is as of this writing approaching 12,000 likes. This weekend, Shaffie’s co host, Kalekye Mumo joined the social network and in a matter of a few hours, her likes were approaching 6000.
Various lists have been compiled showing who has the most Facebook likes in Kenya, but in most of them, the rightful number one is left out. John Harun Mwau comfortably has the most liked Facebook page in Kenya. As of this writing, that number stands at 448,117. The most probable number two is NTV Kenya, whose likes are 318,249. Over One hundred thousand fewer than Mwau’s. Daniel Ndambuki (Churchill) has slightly fewer than NTV, Easy FM and Daily Nation close the top five, with both having over 200,00 likes.
Harun Mwau’s Facebook likes are however not completely organic. Some time back, the legislator paid for a massive promotion campaign, and that explains the huge gap between him and number two.
Uhuru Kenyatta is the most liked presidential candidate, with Martha Karua coming second. Some other notable names include Mathare University of Insane Creativity – a page full of constantly updated humour, Ghetto Radio, Crazy Nairobian and the now popular Campus Divas for Rich Men.
The following list shows a list of some of the most liked Facebook pages in Kenya. (Several have been left out)
Harun Mwau – 448,117
NTV Kenya – 318,249
Churchill – 307,537