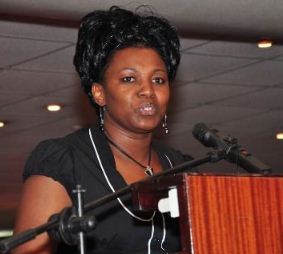 The National Alliance (TNA), is expected to receive Rachel Shebesh any time from now, after the vocal nominated mp, rumoured on several occasions to to be on her way out of ODM, revealed that if she was not in ODM, she will only join Uhuru’s TNA.

Shebesh, in a telephone interview with the nation, revealed that she would only remain in ODM as long as her stay there was tenable. She added that Nairobi politics only had room for two parties, ODM and TNA and for you to remain politically relevant in the city, you had to be in either.
“In Nairobi, you can only make political sense if you are in TNA or ODM. If one finds ODM does not want him or her, the only other way to go is to join TNA,” she said.
That was the greatest hint yet that the MP who has of late cooled down on ODM affairs, was looking the red way. Shebesh, who is said to be interested in the Nairobi Women representative seat, last week teamed up with anti Raila forces to save Amos Kimunya from Parliament’s onslaught.
The genesis of Shebesh ODM woes remain a mystery with some saying she was unhappy with the way Orange Women Democrats elections were conducted. She had ran for the organizing secretary’s seat where she lost. It is also said that Ida Odinga is the reason why Shebesh is leaving ODM. Allegedly, Ida micro manages ODM Reloaded and in the course of business, she often fell out with Shebesh and other members of the team.
© nairobiwire.com
The Sh 400 Million Vice President Residence In Pictures < Previous
John Harun Mwau: Kenya’s Undisputed King of Facebook Next >
Recommended stories you may like: