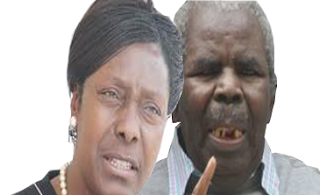 Water minister Charity Ngilu has found her name mentioned by the Kirimas in their never ending legal drama. The wife of the late Gerishon Kirima, Teresia Wairimu accused Ngilu of kidnapping Kirima from his home a few days before he died.
Testifying before the milimani law courts, Teresia said Ngilu colluded with her step children to kidnap Kirima and fly him out of the country. In her testimony, Teresia said that on August 8th 2010, the water minister visited them at their Kitisuru home. She then took her aside so that they can ‘talk’. According to Teresia, a gang of almost 10 men including plain cloth officers forced their way to Kirima’s bedroom and took him with them.
She added that despite the strong opposition from Kirima himself, the men were not ready to leave him behind, and even knocked out two of his teeth. He was bundled into his step daughter’s car before it sped off. Teresia then followed her husband to Nairobi Hospital, where she found him booked under a different name of ‘John Juma’. Police at the hospital refused her access to her husband and she had to file an application at the high court.
© nairobiwire.com
Dennis Itumbi Charged After Exposing Dangerous State Of Jetlink Planes < Previous
Shame: Billionaire Awori Family Begging For Mpesa Funds To Offset Brother’s Funeral Expense Next >
Recommended stories you may like: