Should Miss Karun Study More Than She Sings??

Celebrities are known to gaffe world over especially on twitter. Most American musicians and actors have at least several times deleted a tweet, after realizing it was a dumb decision tweeting it in the first place. Chris Brown has mastered this act. Now, the wave is catching up with our local celebs. Camp Mulla’s Miss Karun was a victim this weekend. She was forced to delete a tweet after realizing that the grammar used was heavily wanting.This comes at a time her university education life was highlighted in one of the dailies. Below is her now deleted tweet. 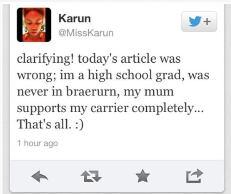 Despite the the fact that it may have been an honest mistake considering many devices come with auto-correct, Kenyans are an unforgiving lot because as soon as they got wind of the tweet, they did not shy from what they do best, make fun of it. Below are some of the crazy tweets.

*Miss karun‘s blood group is type-o.
*without all this fuss made about miss karun‘s grammar i would never have noticed the errors and so would thousand others. Wajinga tukowengi
*On a scale of jua cali to misskarun how bad is your English”
*That Miss Karun moment when autocorrect cannot figure out which word your are trying to spell…”
*Miss Karun should join Sauti Sol and do ‘soma’ rmx
*Hehe, wakamaa laughing at miss karun forgetting that people in grass houses should not throw stoves
*Ati Miss Karun hates going out cuz guys just Stair
*“Mosquitoes are disease careers” – Miss Karun
*what has miss karun did? Hehe””
*Miss Karun doesn’t need sex coz English is already HARD on her
*Miss Karun will beaten you all.
*Miss Karun should took grammar seriously
*My mum sent me a gift thru EMS cuz it’s the best Kuria service. ~ Miss Karun”
*Miss karun went to Bye Brains school.”
*Miss Karun doesn’t want the D.She already has a D. In English.