IEBC To Invite IT Hackers To Penetrate Its Sytem.

By Ken   /   Monday, 09 Jul 2012 08:00AM   /   Leave a Comment
By OLIVER MATHENGE
Do you consider yourself an IT hacker? Then the Independent Electoral and Boundaries Commission will soon be looking for you.
In November, the IEBC plans to invite hackers to try tamper with the system that it will use to transmit provisional results.
According to IEBC CEO James Oswago, this will help the system attract the confidence of Kenyans ahead of the planned March 4, 2013 General Elections.
“We are confident that our system is tamper-proof. However, sometime in November we will invite those who think they can hack into the system to do it. We want Kenyans to have confidence in the system,” Mr Oswago said.
According to Mr Oswago, this is one of the lessons that the Commission has learnt from engagement with electoral bodies that use such systems. 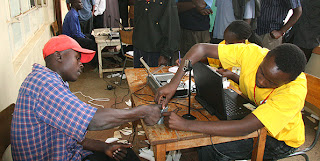 Mr Oswago cited the experience of India, where the electoral body was forced to carry out such an exercise after the Supreme Court suspended use of its electronic voting system.
Last year, after criticism over the integrity of its system, the Election Commission of India offered Sh1.5 million to any “ethical hacker” who would hack into the software and tamper with it.
The commission has been using the Voter Verifiable Paper Trial (VVPT), a new electronic voting machine (EVM) that gives out a paper trail as proof.
Kenyans will not be voting electronically, but the IEBC plans to transmit provisional results electronically. This has already been used during various by-elections and the 2010 referendum but Mr Oswago says the system was now improved.
The IEBC will also introduce a system where voters will have to verify electronically that they are registered as voters and that they have not voted elsewhere.
“The purpose of introducing biometric voter registration is to ensure that we enhance the integrity of the elections and avoid cases of double registration. You will be required to use your thumbprint to prove that you are registered and you haven’t voted again,” Mr Oswago said.
In next year’s election, voting and tallying will be manual. The official results from polling station will also be brought by returning officers to the headquarters in a signed form.
IEBC says only provisional results which will be electronically transmitted to the headquarters, especially presidential results.
“We will screen live all presidential results and we will allow the media access to our servers to ensure uniform reporting. We have given our officers the order of tallying and we will start with the presidential, governor, senator, MP, women’s representative and county assembly representative,” IEBC chairman Issack Hassan said in a recent interview.
He added that though they are supposed to announce the results within seven days of the voting, they will try to announce the presidential results within 48 hours.