Ida Odinga Ejected Sally Kosgey From a Ferry So That Her Motorcade Could Be Accommodated. 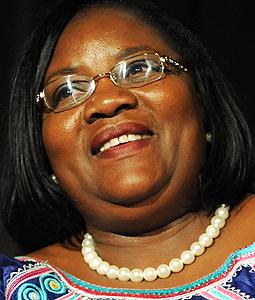 In September last year, an ugly incident occurred at Luanda Kotieno beach in Kisumu. A vehicle belonging to Agriculture minister Sally Kosgey was ordered off a ferry headed for Mbita Point, to give room for Ida Odinga’s motorcade of three cars. The minister, just like Ida, was heading to Rusinga Island to attend the burial of nominated MP, Millie Odhiambo’s mother.
It was reported that Sally had arrived in time for the 12 o’clock ferry and it had already departed before Mrs Odinga or her aides, called the ferry manager ordering him to turn back and get her. The ferry was by then full. Therefore three vehicles had to be ejected to give room for Mrs Odinga. It was reported that the ferry manager argued that one of Ida’s car be left behind so that the minister’s car could be accommodated, but she would hear none of that. This was despite the manager’s assurance that he would make sure the vehicle was ferried in his next trip. The ferry had to go without Sally.
That incident was largely given a media blackout, except by a handful of newspapers.
Now, in Miguna’s new book ‘Peeling Back The Mask’, the former advisor to the prime minister states that on that same day, he was informed by Raila that his wife thought that the minister she ejected from the ferry was public health minister Beth Mugo. Miguna wonders whether it really matters. He adds that Sally asked him what would happen when Raila became president.
© nairobiwire.com
The Big TPF’s Doreen – University of Nairobi Conspiracy. < Previous
Standard Newspaper To Pay Sh 9 million For Defamation. Next >
Recommended stories you may like: