DNA Test Prove Jimwat Has Been Taking Care Of The Wrong Baby. 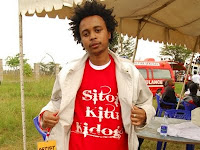 Jimwat has been taking care of a child he all along thought was his, until a DNA test proved he’s not the father.
A Ms Wangui had taken the rapper to court for neglecting ‘his’ baby for 3 months. She said that Jimwat had stopped sending money to take care of the child. Apparently, Jimwat who has for 2 years been taking care of his child faithfully, noticed lack of resemblance between them. He then stopped sending the money, until the court called. Just to be sure, the ‘Under 18’ singer went for a DNA test and he confirmed that he was indeed not the biological father.
The court has now found him not guilty of child neglect. It is reported that Ms Wangui is now begging Jimwat for his hand in marriage.
© nairobiwire.com
Evans Kidero Loses His Cool On NTV And Reprimands Host For Asking Hard Questions. < Previous
Churchill Live Is Back. Next >
Recommended stories you may like: