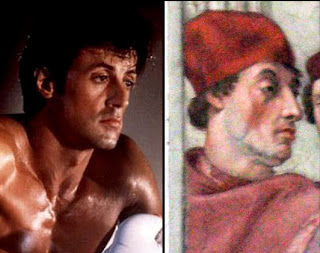 When a group of friends went on a tour of the Vatican, they were not prepared for what awaited them. A painting done by Raphael in the 16th century, bore striking resemblance to actor Sylvester Stallone, popularly known as Rambo.
The painting known as The Cardinal and Theological virtues, was painted in 1511 to represent Law and Religion. It has been on that wall ever since.
Anthony Zonfrell, a Havard student took a photo of it and posted it on the social bookmarking site Reddit. “I posted it at night, and when I woke up it was on the front page. I was shocked at the response it got, it really blew up quite fast. All of the comments were hilarious.”
It has received millions of views.
When asked how he spotted it, Anthony said, “My cousin had told us about how she had seen it when she went, so we were on the lookout. As soon as we saw the painting, we knew it was him. My whole family thought it was hilarious. It could actually be a portrait of Stallone.”
© nairobiwire.com
Next Time You Rob A Cyber Cafe, Kindly Log Out Of Facebook. < Previous
59% of Kenyans Support Oliech Decision To Quit Harambee Stars. Opinion Poll Next >
Recommended stories you may like:
OMG: KenGen Blames Monkey for Yesterday’s Nationwide Power Blackout
Wajir Town Orders All Donkeys To Wear Diapers
There’s a Tomato Emergency in Nigeria.. Prices Rise from Sh120 to Sh4000 in 3 Months After ‘Unkillable’ Moth Destroyed 80% of the Crop
DRC Minister Fired After He Was Caught Masturbating in Office