The video is full of flaws with the most pronounced being, who shot the video? 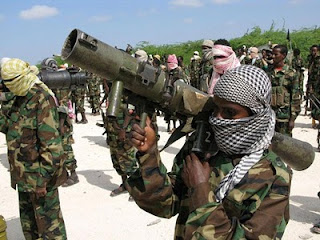 NTV aired a report by John Allan Namu where an Alshabaab operative is seen arranging for the transport of explosives. The man on the video is is heard communicating with another person on phone, where he gives progress and directions for the operation.The man is then seen packing the landmines and some other gadgetry into a brief case, before heading to a bus stop and loading it in. The luggage is bound for Mombasa.
All this happened in this Sunday, the 8th of April in Isiolo. The video is full of flaws with the most pronounced being, who shot the video? John Allan Namu says that the video was captured from a hidden camera, but the video betrays that. If in deed the camera was hidden, how comes it was shaking, moving and zooming on particulars as if being held by someone. The same camera that was in the sitting room of the man handling the explosives follows him to the bus station. From the voice clarity, it is clear that the camera must have been very close to the suspect.
The most fundamental flaw in the recording is the absence of a  face. The man captured doing the talking and handling of the explosives has somehow managed to keep his face away from the camera for the whole time.
The only logical explanation is that the person seen in the video was aware he was being recorded, covered his face proper, allowed the cameraman to zoom on particulars and even accompany him to the bus stop. The reasoning behind the staged ‘explosive dispatch’, is most probably to send a strong message to Kenyans. If Alshaabab produced the video, then they want us all to realize who is in charge. I would not be surprised if the brief case loaded into the bus had no explosives in it. They may be interested in sending the police on a wild goose chase.
Here is the video, watch and make out your conclusions.
© nairobiwire.com
Kanye West Dumps Kim Kardashian. < Previous
Ugandan School Using A Bomb For A Bell. Next >
Recommended stories you may like: