Ugandan School Using A Bomb For A Bell. 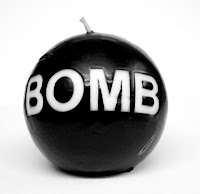 A mine awareness team in Uganda was horrified to find an unexploded bomb being used as a bell when they visited a school to teach children how to spot bombs, a local newspaper reported.
The Anti-Mine Network organization saw teachers banging the bomb with stones to call children to lessons in a 700-pupil school in a rural area, the newspaper said.
“Its head was still active, which means that if it is hit by a stronger force, it would explode instantly and cause untold destruction in the area,” Wilson Bwambale,co-ordinator of the organization, told the newspaper.
Bwambale said they would explode it in a cordoned off area. The Ugandan military has fought two
rebel insurgencies over the last two decades and mines and bombs still litter former battlefields around the country.This is the second bomb that the Anti-Mine Network have found in a Ugandan school in the last six months. Another was found being used by children at lunchtime as a toy and put away in a storeroom during lessons.

NTV’s Al-Shabaab Video Full of Flaws. Can’t Be A Hidden Camera.. < Previous
Jacob Zuma To Marry Fourth Wife Ngema. Next >
Recommended stories you may like: