She partied for 30 minutes. 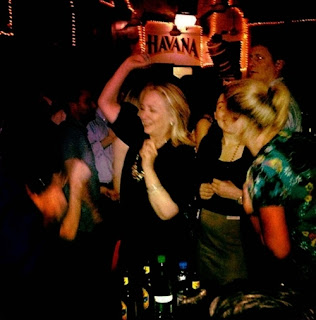 She may be the secretary of state, but who said she can’t party and have fun. Hillary Clinton was last night photographed  knocking herself out together with a group of friends. Clinton who is in Cartagena, Colombia, for the summit of the Americas, showed up at a bar called La Havana, minutes past midnight with a party of about 12 and ordered bottles of beer, whiskey and water.

Just before she went to Havana, Clinton was at an official dinner. Cafe Lavana, has been voted as one of the best nightspots in Cartagena. White house is currently investigating a scandal where secret service agents are accused of misbehaving with prostitutes in Colombia. So is Colombia the ‘party place’ for the US government?

© nairobiwire.com
Kibaki Cancelled UK Visit For Not Getting Presidential Treatment. < Previous
3,000 Guests For Hassan Omar’s Wedding. Next >
Recommended stories you may like: