Kibaki Cancelled UK Visit For Not Getting Presidential Treatment. 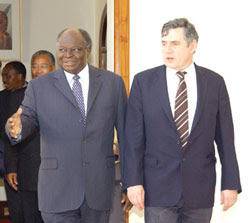 When foreign affairs minister,Sam Ongeri, revealed to a parliamentary commission last week that president Kibaki had turned down a visit to the UK in 2010, where he was to meet both the prime minister and the queen, it was pretty obvious something was wrong. Despite Ongeri refusing to reveal the reasons for the cancelled trip on camera, people concluded that it was Kibaki’s way of telling the west, “I’m looking East’, far from that, the real reason Kibaki refused to meet the queen was the treatment he was scheduled to receive.
The planned visit was rated ‘non ceremonial’, a shift from what heads of state are accorded. Kibaki having just been elected controversially, and Kenya witnessing its worst violence, his aides held the believe that the invite was intended to lecture Kibaki and show him who was in charge of world affairs.
The visit was extended to Kibaki late 2009, before Gordon Brown finally sealed it with a formal letter on January 13, 2010. Kenyan officials received the letter on February 19th, more than a month later. While testifying before the parliamentary committee, Ongeri acknowledged that the reason Kibaki turned down Brown’s invite was because the protocol was ‘inappropriate’. Ongeri said that the president was to be hosted for dinner by Foreign Secretary, David Miliband, yet immediately after his departure from Britain, another president was to be given a full state visit.
Brown on his invite letter had written that the invite was to promote bi-lateral interests and to discuss Kenya’s reform path. That fueled the perception that the invite was to lecture Kibaki. It is claimed that advisory at the Foreign ministry concluded that the scheduled ‘call on her majesty the queen’ was a ‘diplomatic nicety’ meant to conceal the intentions of the meeting with Gordon Brown, that was to follow.

100 Years Later, Facts You May Not Know About Titanic. < Previous
Hillary Clinton Goes Partying In Colombia. Next >
Recommended stories you may like: