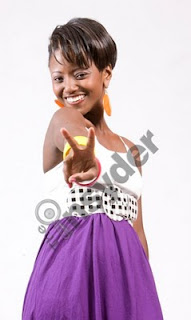 Nancy ‘Namtero’ Mdee ( Tero ), is a household name because of the show she used to host, Str8 Up, on KTN. Last year she was on the gossip columns for no right reason. She was getting married to a Tanzanian preacher, but then everything went wrong and the ceremony was abandoned. Now, Tero has allegedly married prophet Hebron Kisamo of Calvary Temple Church in Arusha in a ceremony held in secrecy. Tero’s family has all along been opposed to the union claiming that the prophet is married to another woman.
Tero is no stranger to controversy and according to Pulse Magazine, she had previously dated Code Red dj Styles, though she denied the affair.
The whole Tero getting married to a ‘prophet’ saga, sounds like more of the Esther Arunga’s story. The two worked in the same company, were heavily popular and got involved in marriages their parents and friends did not approve. Tero is said to have quit her job citing further education in the United States as the reason. What’s striking in the case of Tero and Arunga is how their former employer, standard media group, does not shy away from tearing their lives apart. Pulse pullout of the Standard newspaper is quite vocal on reporting Tero’s misfortunes just like it was on Arunga.
© nairobiwire.com
Woman Gets A Kicking From An Angry Cow (VIDEO) < Previous
Juliani Denies Dating Mali’s Brenda Wairimu. Next >
Recommended stories you may like: