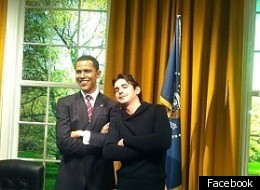 A man wanted for drug dealing was arrested after posting a photo of himself posing with Obama’s wax figure.He disappeared from his home in Taormina in 2008 and has been at large ever since. Cops have been meanwhile following him on Facebook and his location was known when he posted a picture of himself with wax Obama. Other pictures that he posted included several London landmarks and the famous London double Decker buses. He was already sentenced to 5 years in prison in absentia by an Italian court.