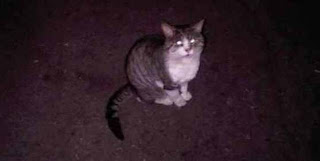 During Monday’s game between Liverpool and Tottenham, one cat was king. It is the stray cat that brought the match to a standstill by strolling inside the pitch, obviously unaware that it would soon be a global phenomenon. Already, a twitter account belonging to the cat has already amassed over 20,000 followers. The previously anonymous cat has now been identified as ‘Socks’ , a homeless cat that regularly strolls Lothair Road near Liverpool FC’s home, anfield.