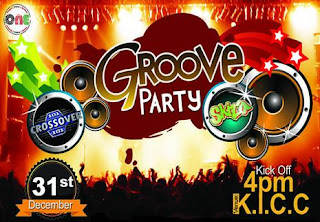 Mo sound Entertainment, the organizers of the annual Groove party have cancelled this year’s event citing insecurity. Apparently there has been a plot by the Al-Shabaab to disrupt the party the way they do best. In a statement released by Mo Sound, they acknowledged that the preparations for the bash were at a very advanced stage. The party has traditionally been held at the night of December 31st and had the Al-Shabaab kept off, this year would have been no different.

It is not clear if other major parties planned for the night of December 31st, like the Easy fm Beach Party will continue as planned. This is the statement that was released by Mo Sound Entertainment.

Mo Sound Entertainment, Groove Party and its partners regret to announce the cancellation of the End year event, Groove Party slated on the 31st December 2011 at the KICC.
The preparations for Groove Party 2011 were at a very advanced stage having received all the necessary clearance from relevant authorities. However, the Kenya Police has raised a red flag based on available security intelligence, and in the interest of the safety of fans, it has been decided to cancel the event altogether.
“Al-Shabaab has threatened to hijack the event and do destructive damage to the participants and the facility” Said Nairobi PPO (Provincial Police Officer) Antony Kibuchi.
“Together with our partners and sponsors, we would like to thank you all for your continued support for Groove Party and all our events”, said Kevin Mulei – Managing Director of Mo Sound Entertainment.
Groove Party will have a Live TV show to be aired on KTN on 31st December from 10pm and will feature Groove Party artists.
Mr Mulei, on behalf of the Groove Party team, also took the opportunity to wish all the fans “a Blessed Christmas and a Groovy New Year,” and unreservedly apologized for the inconvenience caused by the unforeseen cancellation, stressing that it was occasioned by factors beyond his team’s control and was “necessary in order not to compromise the sanctity of human life and property.”
Suarez Banned For 8 Matches < Previous
Woman With Ebola Symptoms Dies In Nairobi Next >
Recommended stories you may like: