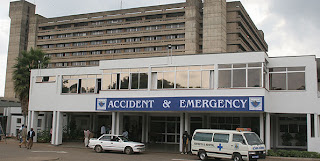 A woman who was last night rushed to Kenyatta National Hospital showed symptoms of the deadly disease, Ebola. Doctors say the woman was accompanied by three people who were quarantined immediately after the woman died.
“At about 10.20 am, a woman was brought in a taxi and she was accompanied by three people. She was bleeding heavily from parts of her body and she died even before she could be taken out of the car,” Dr Masika Wafula, a Consultant on Infectious diseases told reporters at the hospital.

The woman was reportedly working at a hotel in downtown Nairobi and a team of medics was sent there for further analysis. Ebola is known to kill virtually all its patients within a few hours.

Groove Party Cancelled < Previous
Man Crashes Lamborghini Immediately After Winning It. Next >
Recommended stories you may like: