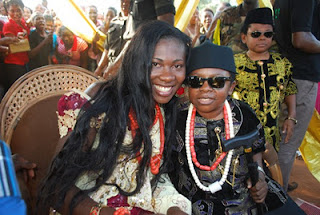 Popular Nigerian actor, Chinedu Ikedieze, better known as Aki, of the popular Nigerian comedy movie Aki na Ukwa, finally wed his lover. The lucky girl is Nneoma Hope Nwajah. the ceremony was held secretely in Lagos, after another traditional wedding a week earlier. Among those in attendance were the duo of  P-Square and of course his screen twin ‘Pawpaw’ was his best man. The officiating Pastor, Akin Komolafe urged the wife Nneoma to be submissive to her husband as the Bible requires.

The couple wanted a private wedding and it is understood that they had to shift the event at least once to avoid a large crowd. Recently Aki had been interviewed about his love life and this is what he had to say.

“There are wives and there are wives, also there are friends and there are friends. It is easy to have a girlfriend and enjoy yourself and have fun. But I have found out that when you want to settle down you must do that with somebody that will and must make you happy always. Nneoma makes me happy always. When I met her in 2008, it was not quite easy, but I first saw her in 2005 in Lagos, on the mainland. She visited the production where I was working; she was still in school then as an undergraduate. From there, we became casual friends until that 2008 when we decided to move the friendship to the next level and by the grace of God, this is the result.”

During their traditional wedding, an unprecedented crowd caught everyone off guard and thus caution had to be taken when planning for the main wedding. That explained the secrecy that surrounded the date and venue. We wish the couple a fruitful life together.

Kenyan Entertainer Of The Year 2011. < Previous
Birds Mistake Parking Lot For Water Surface And ‘Crash Land’ 3000 Dead Next >
Recommended stories you may like:

Ndovu Kuu Talks About Life in Campus: ‘My Girl Was ‘Stolen’ So I Wrote a Hit Song’