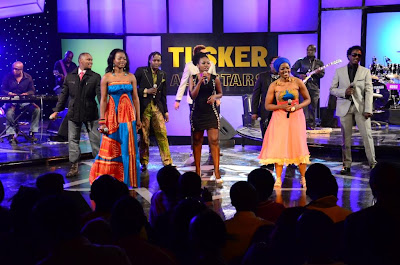 East Africa was treated to the first Tusker Project Fame All Stars this Sunday. Just as had been promised, surprises were many. Starting with the absence of judges to the inclusion of superfans, who quite well know their job description, to the inclusion of the Tusker Pub. The premiere was splendidly done and thumbs up to the whole team.

The stage has been ‘renovated’ and now may compare favourably  with the likes of American Idols. However they don’t seem to understand that those Tusker colours will not make any stage look good. The inclusion of some bit of blue background  was however an improvement. By now, everyone knows that Tusker All Stars is brought to us by Tusker, so that big tusker banner would be better out of stage, or at least replaced with a screen. The lighting is quite admirable and definetely an improvement from the past. But people will ask, isn’t there any way everything can be done on LIVE TV? Yes the different sections of the show would bring enough complications, but maybe the performances and the super fans segment can be done on live television.

Gaetano and Eve blended quite well though they rarely were together. Eve was particularly remarkable because she appeared to have something unique for every contestant. Joey, the super fan, however seemed to be having a problem coming up with lines, especially introductory lines.

Whether or not the contestants have improved from their last appearance on TPF, is a matter of argument but for sure some outdid the others. Msechu was good, Ng’ang’alito was not. There is one thing  they have not come to understand yet even after been in the outside world. The audience rarely enjoys music they do not know and worse is when it is in a language they do not understand. For instance people may rate Hemedy better than Davis for that reason. Please stick to what people understand if you want to get votes.

VERDICT
That the Tusker All Stars Premiere Lived up to the hype, maybe 80%.

Chief Justice With a Stud and Swag. Willy Mutunga Joins Twitter and Facebook. < Previous
Tusker All Stars ‘super fans’ Receive Enough Criticism Next >
Recommended stories you may like: