The official tusker all stars facebook page facebook.com/tuskerlager, was almost brought down by comments from disgruntled fans across East Africa. Most of the scathing attacks were spared for  the ‘super fans’ Joey and Vipul. Finding a single comment praising the two among the hundreds of comments submitted on Tusker’s official page is almost an impossibility. Most were quick to dismiss the whole idea of some super fans but others felt that the idea was brilliant but the problem lies with the fans.

Quick to note is the fact that many people did not know what was in store for them. Many expected to have their usual three judges. That may be attributed to poor marketing on the part of EABL.  Some people also accused the organizers of cloning Churchill Live by introducing the Tusker Pub.

The comments have been so damaging that the admin of the page, who is obviously Tusker, has been forced to cool things down, case in point when every comment was about Joey and Vipul, Tusker wrote, 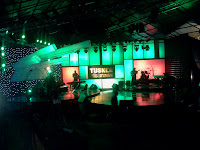 Thank you for your comments, we are looking into the issue. In the meantime, please continue voting for your favourite All Stars.
East Africa will wait to see whether Tusker All Stars will do away with the super fans segment or the disgruntled fans will have to live with them for the next eight weeks.
Tusker All Stars Premieres < Previous
Facebook Hires Renowned Hacker Next >
Recommended stories you may like: