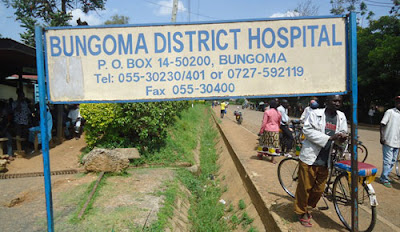 In one of the most horrific incident caught on camera, a woman was recorded giving birth on a cold dirty floor at the Bungoma District Hospital.

Apparently, the pregnant woman’s delivery time arrived, but no nurse was around. Some women went around looking for nurses, who instead of rushing to the ward, took their time. By the time they arrived, the woman’s baby was half-way out.
Then, in one the most inhumane acts, the nurses started hurling insults and slapping the woman for messing up the floor. They still did not assist her with the delivery.

After the child was completely out, they took it away from her, and told her to walk to the delivery room for the final procedures.

The video was taken by another expectant mother, who after witnessing that, instructed her husband to take her to another hospital.

The hospital however denied any wrong doing, saying that it is understaffed.

Loading...
PETER KENNETH: I Oppose The Move By MPs To Pull Kenya Out of The Rome Statute < Previous
Kenyans React To News That Newspapers Will Cost Sh60… Hilarious Next >
Recommended stories you may like: