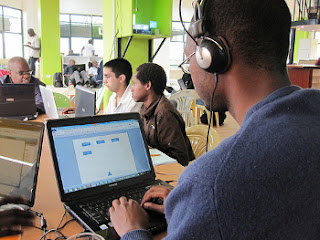 SOUTH Africa appears to be losing its status as the preferred investment destination on the continent for international technology companies. That honour, increasingly, is going to Kenya, which may be on the cusp of a technology-fuelled era of economic growth.
When apartheid ended in 1994, there was a flood of investment into South Africa by technology companies. Microsoft, IBM, Intel, Motorola, Xerox, Hewlett-Packard — they all poured millions into establishing local offices to serve not only South Africa, but, often, markets across Southern Africa and even sub-Saharan Africa.
The view was that South Africa was the gateway to the continent. Twenty years later, perceptions are shifting.

In South Africa, economic growth has flatlined. In the technology space, a weak policy-making and regulatory environment, coupled with a disastrous education system, are undermining prospects.
Last year, when IBM decided to set up its first research laboratory in Africa, it chose Kenya. The Kenyan lab joined existing IBM facilities in the US, Switzerland, Israel, Japan, Ireland, India, China, Brazil and Australia. Over the years, the labs have been credited with inventing many of the foundations of the IT industry.
The Kenyan lab, which includes pre-and post-doctoral scientists and researchers from academia, government and industry, would conduct research focused on solving problems relevant to Africa and contribute to the building of a science and technology base for the continent, IBM said.
When Google chairman Eric Schmidt visited Africa in January, he did not travel to South Africa, spending time instead in East Africa and West Africa. In Kenya, he said Nairobi had emerged as a “serious tech hub” and could become the continent’s technology leader.
He praised the country’s relative political stability (election violence in 2007 and 2008 notwithstanding), its use of the British legal system and its benign climate, saying these all contributed to its attractiveness as an investment destination.

Microsoft chose Kenya as the site of its first “white-spaces” spectrum trial to test the feasibility of using television broadcasting spectrum for broadband. The list goes on.
And it is not only international companies investing in Kenya that have attracted attention. A number of innovations have been developed in Kenya that have garnered international attention. The most celebrated of these is M-Pesa, the mobile banking and commerce platform pioneered by mobile operator Safaricom. M-Pesa has made Kenya an international case study in mobile commerce.
M-Pesa is now used daily by millions of Kenyans to buy goods and receive money. It has since been exported to other markets, although the only other country where it has enjoyed huge success is Tanzania, which also has a poorly developed banking system.
Another Kenyan tech pioneer is Ushahidi, a nonprofit software company created in the wake of the disputed 2007 election. Ushahidi developed open-source software that could be used to collect and visualise information on interactive maps.
The software was used to show outbreaks of violence based on reports submitted by people on the ground, usually using their cellphones.

Kenya’s government is now spearheading efforts to transform the country into Africa’s tech capital. Work has begun on an ambitious technology centre called Konza City that could eventually cost as much as $14.5bn.
If South Africa does not think its position as the continent’s tech leader is not threatened, it should think again.
•  McLeod is editor of TechCentral.co.za. Follow him on Twitter @mcleodd
• This article was first published in Sunday Times: Business Times