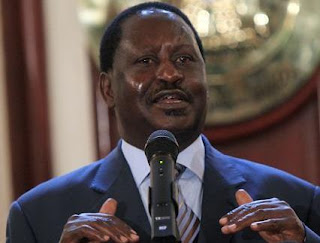 Reports reaching us indicate that Raila Odinga might attend Uhuru Kenyatta’s swearing-in ceremony at the Moi International Sports Centre, Kasarani this Tuesday.
Nothing has been made official yet, but sources say that Raila is seriously considering making an appearance.

Though the prime minister denied meeting Uhuru this week, as reported by The Star newspaper, we are made to believe that Uhuru has contacted him expressing desire to work for the good of the country. Apparently, Uhuru believes the outgoing prime minister should play an important role in foreign matters, particularly UN or AU assignments.
Some of this contact was reportedly made even before the ruling by the Supreme Court.
It is not however clear whether Raila is enthusiastic to pick up such a role, especially after his recent involvement with CORD affairs and the Governors powers debate, which have hinted that he is not ready to retire from politics yet.

Raila has however wished the new government well, and it would not be a surprise should he show up at Kasarani.
© nairobiwire.com

Loading...
Jaguar Will Also Perform At Uhuru’s Swearing-In Ceremony < Previous
Pictures of Evans Kidero’s Car.. The One Everyone is Talking About. Next >
Recommended stories you may like: