Margaret Wanjiru: My Degrees Are Not Fake And Kidero Stole My Governor Ticket 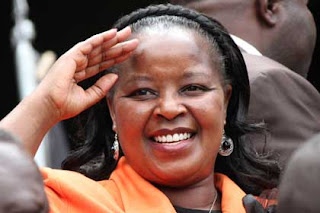 Nairobi Senator candidate Margaret Wanjiru last night appeared on Citizen TV, where she had her chance to reply to Mike Sonko, who was hosted on same station last week.
The former Starehe legislator first of all gave an account of how she missed out on ODM’s governor ticket. She claimed there was a lot of conspiracy, at the highest level in the party, whose aim was to lock her out of the race.

Wanjiru started recounting how she was first informed that she had not paid her nomination fee, despite depositing the receipts at Orange House. This she saw as a red flag, and her eyes remained more open henceforth.

Then, some organs in the party got hold of an opinion poll that showed Wanjiru as most popular governor candidate in the City. This did not go down well with one of her competitors, who wondered how she could be more popular than him, yet he had campaigned for not less than 2 years, compared to Wanjiru’s few months. Despite pressure from Belinda Obura, Wanjiru refused to reveal whether that candidate is Evans Kidero.
That opinion poll incident was in her opinion what crucified her. There was no way she would be allowed to contest.

Those out to lock her eventually settled on her degrees, which she continues to insists are genuine. Wanjiru says that she has letters from the Kenyan Embassy in Washington, which confirm that the colleges she attended are operational and legal. However, those out to block her somehow managed to bend the system.

On the nomination day, her name was not on the ballot, but according to her, her supporters still voted for her by scribbling her name on the ballot papers. If she’s to be believed, her votes were actually more than Kidero’s despite her name not being on the ballot paper. This sent shock waves to Orange House, which then offered her the position of women representative. She refused to take it.
When she was offered the senator position, she said she would think about it, and that her seniors should also speak to Elizabeth Ongoro who was by then claiming the ticket.

It was finally given to her, to the disappointment of Ongoro, who then went on to rant how Wanjiru was an academic dwarf.
Wanjiru however said that she had forgiven her and that they’re still friends.

On Sonko, Wanjiru said that the immediate former Makadara legislator is just a young man who needs to be guided and mentored.
© nairobiwire.com

Loading...
They Want To Kill Me, There’s Something I Have To Tell Raila – Waiganjo Finally Speaks < Previous
Raila Agrees To Meet Waiganjo Next >
Recommended stories you may like: