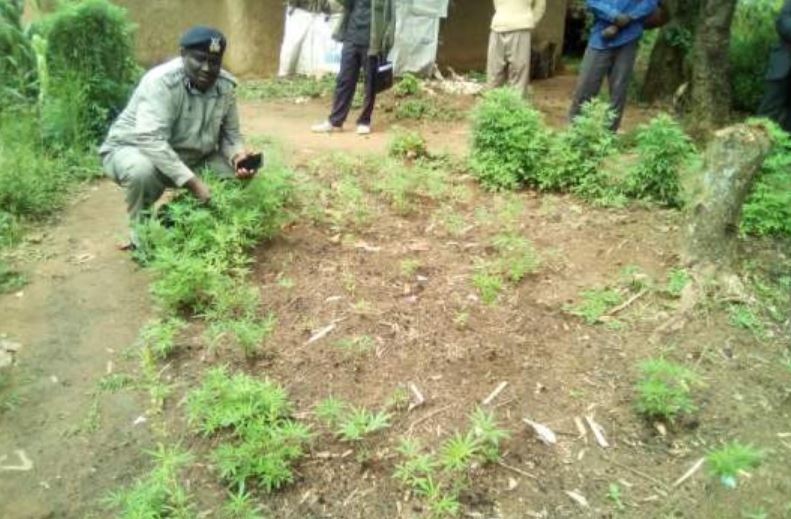 There was drama in Sirivi village Navakholo Constituency in Kakamega County last week when police raided the home of a local marijuana grower.

During a crackdown following a tip-off from members of the public, police were taken aback when the 28-year-old ganja farmer welcomed them cordially and even directed them to his marijuana plants.

“We reached the man’s compound. He looked calm and composed and in fact, he welcomed us politely and we found that he had planted the substance in a small piece of land that he had fenced to keep off intruders,” said Navakholo OCPD Richard Omanga.

The man warned the cops against uprooting his plants with disrespect, saying he would curse them.

“We were shocked that the young man confidently warned us against uprooting the drug stating there is a special way of doing it that involves special prayers and if not the stranger or intruder gets cursed by the owner and the plant and from his ‘gods’,” added Omanga.

The police boss said the farmer claimed the plants are sacred and warned them that they would go mad.

“The young man also told us that the substance gives him super energy that helps him to work efficiently and for long hours hence pledging a lot of respect for the drug, which he called ‘Sacred medicine ‘that needs special protection from destructors threatening my officers that in due time they will run mad,” said Omanga as quoted by the Nairobian.

“We were shocked when he told us he cannot allow for his medicine that makes him energetic and work to earn a living to be destroyed and yet youths are being killed and spend time in jail for stealing and engaging in crimes due to unemployment and that is why he took an oath to protect the marijuana and to curse those who destroy or kill the plant.”

The cops nonetheless uprooted the plants and arrested the man.

“He said in due time we will go mad, it is now(Wednesday) two days my officers and I are still normal, he said the power of his ‘gods’ will punish us but for us, the man was speaking under the influence of the bhang and that is why we want to protect our youths from abusing drugs,” added the police boss.

Funny Tweets by Kenyans on Twitter for Monday Blues < Previous
President Ruto Names Cartels “Financing Raila’s Protests” Next >
Recommended stories you may like: