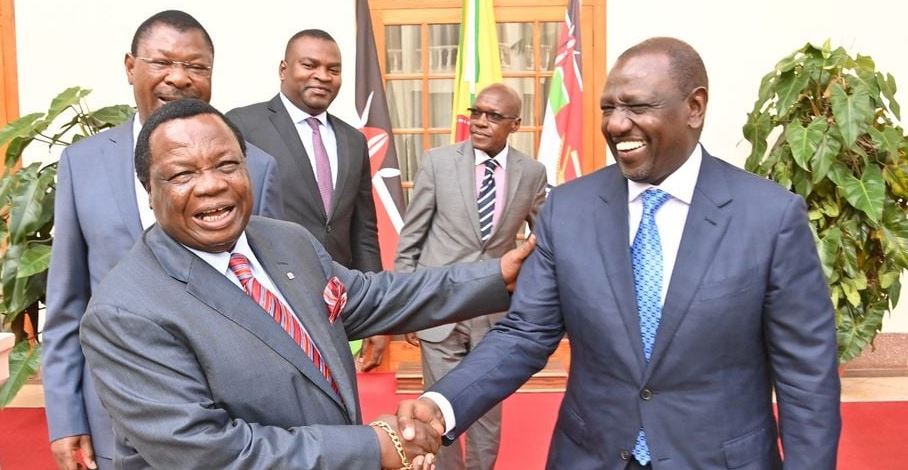 Atwoli, who fiercely opposed Ruto’s bid in the run-up to the 2022 Elections, was part of a delegation from the Luhya community that met Ruto.

Defending his decision to eat humble pie, the outspoken trade unionist said it would be pointless to remain politically partisan after the electioneering period was over.

“I’m sure some of you saw me at the State House last week and are wondering what we talked about with President Ruto.  I paid him a courtesy call alongside Luhya leaders Musalia Mudavadi, Moses Wetang’ula, and Boni Khalwale,” Atwoli said at a public event in Butere over the weekend.

The COTU boss disclosed that he and Ruto joked about the swipes they traded during the electioneering period.

“We mostly joked about the political jabs we traded during the electioneering period because we were in opposing camps, and it was all laughs, especially when I reminded him of the “kateni miti sugoi” (cut trees in Sugoi) phrase I used to discredit his candidacy, and he reminded me of how he loved to hit back at me with the Mzee wa manyororo (an old man who loves necklaces) line,” Atwoli said.

The workers’ boss noted that contrary to expectations, Ruto proved to be a “mature democrat who received me so well at State House”.

Atwoli said he also used the opportunity with Ruto to advocate for the passage of global trade laws that had yet to be domiciled in the country, as well as to call for an increase in sharable revenues to the counties.

Govt To Boost Internet Connectivity For Rural Communities – CS Owalo < Previous
All The Trending Memes and Tweets This Tuesday Next >
Recommended stories you may like: