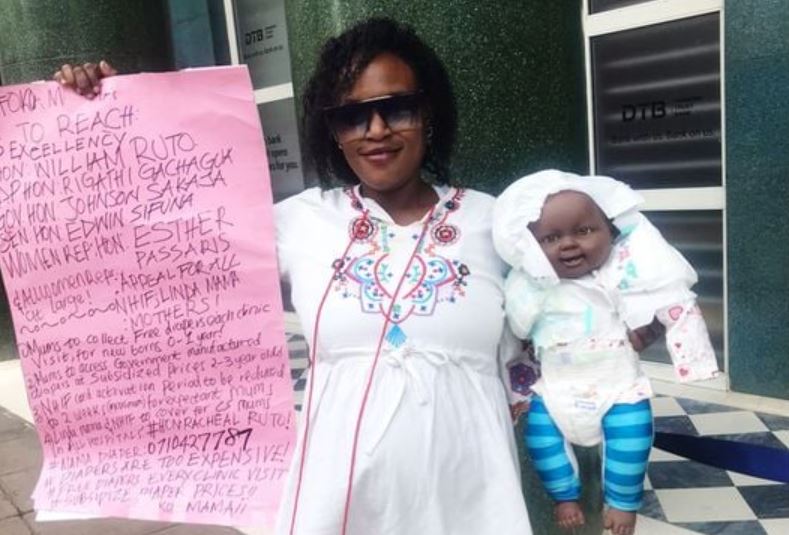 An expectant woman has opted to take to the streets in a valiant solo protest against the high cost of diapers.

On one hand, she held a baby doll wrapped in diapers, and on the other, a placard addressed to President William Ruto, First Lady Rachel Ruto and Nairobi leaders led by Governor Johnson Sakaja.

Mama Diaper wants the leaders to intervene by providing government-funded or free diapers.

“I am expectant, almost due and I am having anxiety over diapers. I have a one-year-old child and when I think of the diapers budget, it really ties me down. I have tried to get mothers to demonstrate with me but they are scared, I don’t know why but as a mother, I want the government to come in and speak for them instead,” she said.

Sandel proposes that mothers who have given birth through the NHIF or Linda Mama program should have access to free or subsidised diapers at every visit to a post-natal clinic.

“I would like the government to provide means that NHIF and Linda mama mums can give birth to any hospital as long as you have the cards,” she added.

Under NHIF Cover, expectant mothers have access to antenatal visits, maternity cover of up to Sh10,000 for normal delivery while a C-Section delivery is covered up to Sh30,000.

Suher adds that the government should manufacture its own diapers and sell them to mothers at subsidised prices for babies below three years of age.

Trees To Be Planted At All State Functions – Cabinet < Previous
Ndichu Brothers’ Apology That Made Murgor Sisters Withdraw Assault Charges Next >
Recommended stories you may like: